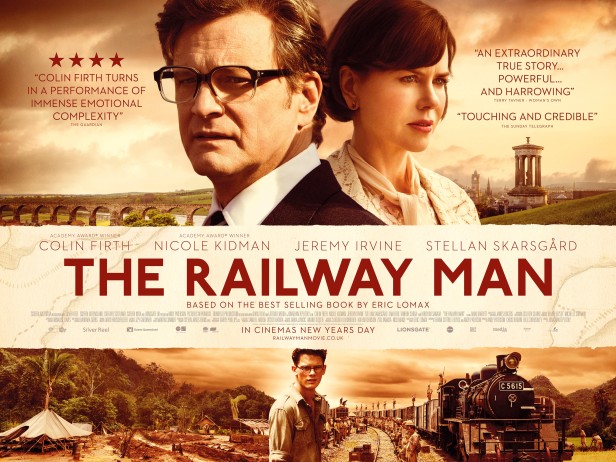 While we are inundated with movies and TV shows and news of shootings involving more recent cases of PTSD, we forget that there were millions of people coming home from World War II who would never be the same. With the exception for a slight few movies, including  The Best Years of Our Lives which came out at the wars end in 1946, there aren’t a whole lot of movies focusing on this issue in the past. That’s where The Railway Man comes in.

Colin Firth, who hasn’t exactly done anything entirely great since his winning role in The King’s Speech, plays Eric Lomax, a man who has never been able to let go of the past. As a prisoner of war during World War II in a Japanese labor camp, he and thousands of other allied prisoners were forced to build the Thai/Burma railway, a task deemed inhuman and impossible. At the start of the film, we see him in his mostly isolated life in England in 1980. He goes to the Veterans meetings and studies his train timetables. He loves trains, he always has. One day, by chance, he meets Patti (Nicole Kidman) on a train and he falls for her. Within the first 15 minutes or so they are married, but then we see that everything is not alright with Eric. He has fits and sometimes just shuts down entirely and loses control. Patti desperately tries to find out what happened to him during the war and gets nothing.

Through flashbacks, we learn what did happen. The younger Eric, played by Jeremy Irvine (Warhorse), is a radio man. He sits in the bunker and is not out in the fields killing. When the British surrender he gets taken to a prison camp. Him and his comrades initially try to make light of the situation, but soon find themselves unable to escape. The camp scenes are very intense, but thanks to the controlled direction of Jonathan Teplitzky, they are not overwhelmingly brutal. Some movies exploit beating scenes for no reason just for shock-value and to show the senseless brutality brought on by the guards, but here, each one has some sort of significance to the plot. Slowly but surely we find out what occurred at the camp, while at the same time in the present we learn that the man who was the cause of the torment for Eric is still alive. Eric then has to decide whether he wants to carry out revenge or forgive the man.

Firth is as excellent as always. If this were released closer to award season I would definitely think he could be up for his performance. It is a captivating and emotional performance. After living more than half his life with the scars of the war, he has become so obsessed with it. It haunts him every day. It even has ramifications on his love life. Yet, he still loves his trains, and they are what keeps him going, both metaphorically and literally. Irvine too does a great job, though most of the time he is being beaten or tortured. He is the smartest of the allies, even building a radio from spare parts. He is the hope the men need.

I was also incredibly impressed by the cinematography of the film. From the beautiful countrysides of England to the hot and dense forests, the movie never ceases in being a visual treat.

It is easy to forget that everybody who participates in a war is inevitably a victim. The winners bring back scars and dead bodies too. But it is also easy to cast blame on who was the enemy to us. From all of the media portraying the Japanese as cruel and malicious during the war, it is clear why there is such a malevolence towards them in all the portrayals of the war. Yet, they too were victims. They lost loved ones, their cities were destroyed, and they too had to live on after the war with scars. This movie deftly handles this subject matter, showing that sometimes people are forced to do bad things, when they really don’t want to. Sometimes it’s a matter of life or death.

In the end, The Railway Man is an emotional journey through the past and the mind of a a man deeply haunted by his experiences. It is filled with beautiful cinematography and powerful acting, and the reminder that sometimes it’s easy to point fingers and decide someone is bad just because of their actions independent of why they do the things they do.

3 thoughts on “The Railway Man Review”