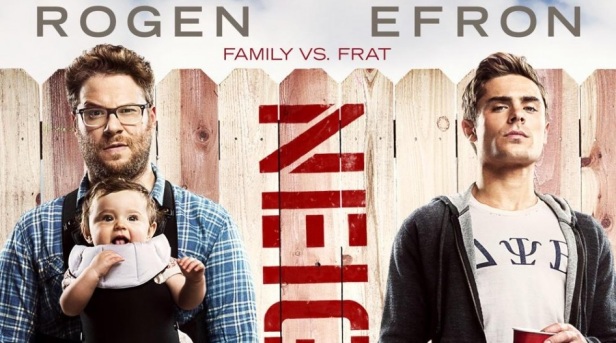 We’ve all had bad experiences with neighbors. They can be noisy, snoopy, or just plain miserable to live by. The new comedy, Neighbors, takes neighborly warfare to a whole new level.

Mac and Kelly have a new baby, Stella. Their lives are dominated by constantly having to take care of her. They are slowly turning into another “old married couple” and it is not going over so well. Other than the baby crying in the middle of the night, their lives do not contain too much noise or excitement. That changes, however, when a fraternity moves in next door. Initially Mac and Kelly attempt to be open with their new neighbors. Joining them for a party, they bond with them and we think everything is going to be ok. The president of the fraternity, Teddy, promises to keep it down, and if need be, to call him before they the cops and he’ll keep everyone in check. It doesn’t last long and after not being able to reach Teddy, the cops are called, and a war begins over a broken promise.

This is where things start to escalate. From cans and toilet paper strewn across their yard to a hilarious sequence of stolen airbags, the war goes from mild to extreme rather quickly. I won’t ruin any of the gags not seen in the trailer, because there are quite a few great moments in this movie.

Seth Rogen (Mac) is essentially the same character he plays in every movie, which is not necessarily a bad thing. He is lovable and hilarious, sporting both a stoner side and a father side. His reluctance to grow up helps make him even more lovable because we can see he is trying to mature and let go of his past. His chemistry with Rose Byrne (Kelly) also fuels their relationship. They both make jokes and are a great team at fighting back against the fraternity.

The fraternity is made up of Zac Efron (Teddy), Dave Franco (Pete), Christoper Mintz-Plasse (Scoonie), and many others. Teddy is basically a mirror image of Mac. He is reluctant to grow up. He is not the best student and therefore is worried about his future, but instead of fighting for it, he fights against it by throwing outrageous parties. The script is smart enough to give him a reason to do it instead of simply being an obnoxious neighbor without any motive for being obnoxious. Efron’s comedic chops are outstanding and he definitely takes the spotlight and shines. The supporting cast is also great, with each of them offering up a couple hilarious moments.

The movie surprisingly has a fair amount of truth. It isn’t an insane party movie just for the sake of partying. It tries to justify the character’s behaviors, which isn’t normally seen, and for the most part it works out.

Neighbors is hands-down one of the funniest movies to come out for some time now. It is full of hilarious moments and some great comedic acting. So, go check it out if you want your gut to hurt from laughing too hard.

One thought on “Neighbors Review”