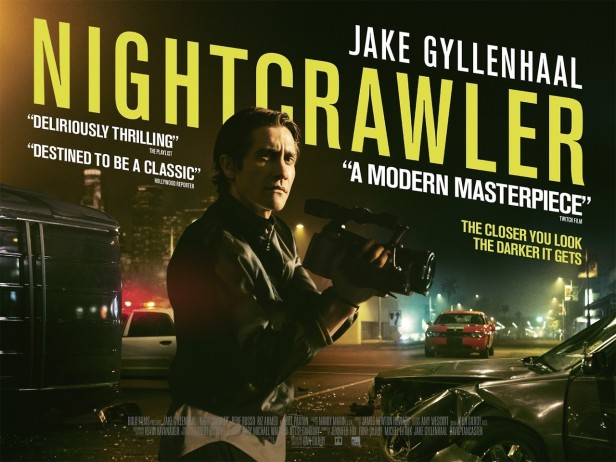 As a journalism student I am taught to be aggressively persistent when it comes to finding the truth and a good story. We have to morally remove ourselves from the story and report it as best as possible. Sometimes what is reported is not always right, but it needs to be reported. Nightcrawler takes this idea and combines it with a persistent and manipulative main character, the grimy nightlife of Los Angeles, with the end result being an exceptional character study that does not pay off as much as it should.

Lou Bloom doesn’t have a job. When he isn’t pilfering manhole covers, chainlink fences, or bikes to sell for cash, he is educating himself on his computer. One night, while driving around, he comes upon a car wreck where a freelance videographer arrives to film the wreckage before the actual news media shows up. These people are called nightcrawlers, or stringers. Lou immediately finds a new job opportunity in this situation, so he buys a cheap camcorder and a police scanner and starts to try and get into the business. This leads him to Nina, the morning news director whose career is looking to be going downward. She finds his work impressive and they start a tentative partnership; he supplies her with “gory” footage, she pays him, and her position is elevated.

What drives this movie is not the story. There is hardly any major incident that Lou covers, aside from one that constitutes a good chunk of the third act. Instead we get a performance driven character study headlined by Jake Gyllenhaal. Gyllenhaal is deliciously conniving as Lou. Imagine a mix between Travis from Taxi Driver and Rupert from The King of Comedy and you’ll have a fair assumption of his character; the gaunt-looking loner who drives around all night, but also the talkative and cheerfully obsessive wannabe. Gyllenhaal goes all out. He is electrifying to watch; he is sly, cunning, and borderline autistic. He has no notion of social norms; he lies out what he thinks right on the table even if it is offensive or creepy and he is willing to use anybody for whatever purpose to get what he wants. It is one of his best performances ever, and I would be extremely surprised if he doesn’t get at least a nomination for his work.

Gyllenhaal, though he steals the show, has a pretty decent supporting cast. The only other character who comes close to the screen time that Lou has is Nina, played by Rene Russo. Like Jake she is desperate. Her job is on the line and essentially rests in his hands. Russo, who is married to the director, Dan Gilroy, is fantastic. Substituting someone young and fresh for someone who is older and more experienced was an interesting choice but it pays off due to the intensity of the script.

While it isn’t the most tense or beautiful movie of the year, it does have its moments. There is one exceedingly tense scene that ends up turning into a car-chase. It is the most exciting moment of the film that makes it out to be an action movie. Other than that the movie is strictly about Lou’s attempts to climb the ladder to success by any means. All of this takes place, aside from a few scenes, in the nightlife of LA. The cinematography is like a mix of the bright-darkness of Michael Mann’s Collateral and the neon-streaked Drive, and it comes to be its own haunting image of the city.

As I have said before, due to its focus on characters rather than story, the film ends leaving you hungry for more. The film is basically Lou trying to get success punctuated with brief moments of gruesome crime scenes and excellent acting. The end of the film comes just moments after a new thread of a storyline is started. Our anticipation to have that thread continue makes it a little shocking to see the credits start to roll. There are better ways the movie could have ended because it leaves you feeling tricked into thinking there would be more.

In the end, Nightcrawler is a fantastic film up until the very end. After carrying us through with brief tense moments, beautiful cinematography, ambient music, and phenomenal performances, its ending with leave you craving something a little more. If you can handle a little gruesomeness, have a thing for broadcast TV (or Jake Gyllenhaal), then Nightcrawler is the movie for you.